Competition Plus: HALE TO DRIVE PLUEGER’S NITRO FC IN VEGAS

John Hale will be back racing in NHRA’s nitro Funny Car class at the upcoming national event at The Strip in Las Vegas, March 31-April 2.

Hale confirmed to Competition Plus he will be behind the wheel of a Funny Car owned by Steve Plueger.

“This came about because Jeff Arend and I are friends,” Hale said. “Jeff, who normally has been driving (Plueger’s) car, told me he is going to drive for the Russo’s (in Las Vegas), and Steve wasn’t sure whether he was going to go to Las Vegas and we talked and I offered to drive it for him.”

Hale drove the Jim Dunn Racing Funny Car for 48 races during the 2015-16 seasons.

In two years with Dunn, Hale’s best performance was a runner-up effort at the Gatornationals in 2015 to Ron Capps. He had a total of nine round wins over the two seasons.

“You need to stay current in these things if you’re going to drive them,” Hale said. “I want to keep my license current and the opportunity to do a race or two was really all I was looking for this year with my other (Nostalgia Funny Car) schedule, and this (deal) with (Plueger) fit in. This is exciting and there’s nothing like driving one of those cars. It’s hard to explain to anybody who hasn’t driven one and anytime you get an opportunity to drive one it is hard to turn down.”

Hale isn’t a stranger to Plueger.

Although Hale did step away from Dunn’s full-time ride, he has continued to compete in the sport in in his “One Bad Texan” Nostalgia nitro Funny Car. His 2017 race schedule is listed on his website – www.johnhaleracing.com. Hale’s first race this season was the Good Vibrations March Meet at Auto Club Famoso Raceway in Bakersfield, Calif., March 2-5.

“We won first round there and in the second round we had some oil out in our lane past he starting line and we hit it and one tire started spinning and it hooked me toward the center line and I had to give up,” Hale said. “We learned a good lesson that we should always go out there and check that lane. I will be running my Nostalgia Funny Car next on May 19-20 in San Antonio. We were a little hard on parts in Bakersfield, but when the car is running good numbers it takes a little bit of the sting away from hurting those parts. The car was really flying. We didn’t have a run slower than a (5).77 until the second round when got in that oil.” 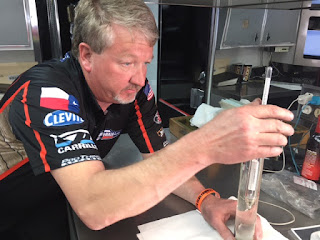 LIFE AFTER THE BIG SHOW - John Hale is adjusting to life after the big show, and the biggest lesson for him is how the return to normal life isn't too difficult.
Hale resigned his position as driver of the Jim Dunn Racing Funny Car at the end of the 2016 season. He might have left the major league of drag racing, but this didn't mean he was leaving the straight-line sport.

Hale returned to his comfort zone of racing in the NHRA's Heritage Series, with his nitro-burning 1969 Camaro.

"There is a good life after the big show," Hale said.

In a sense, racing the NHRA Mello Yello Drag Racing Series was a bucket list item. Been there, done that and now move on.

"It was a dream of mine since going to the Texas Motorplex and hanging out there, and sneaking underneath the tower on Friday nights and watching qualifying," Hale recalled. "I dreamed of someday being in one of those cars underneath that tower and I got to do that.

"I wouldn’t trade those last two years doing the big show for anything. But it took everything I had time wise, mentally and physically. And I’ve just got some other things that I want to do. I want to promote my barbecue sauce, I want to get my Nostalgia car back running tip top, you know. And I couldn’t do that and do the other at the same time. So I’m content."

Pomona this season provided a few butterflies, but they quickly flew away.

"I was waiting for those emotions to come," Hale admitted. "And when it came around, I wanted to be there. I miss driving the car, but if I were there, I probably wouldn’t miss it. Does that make sense?

"I watched from home on the TV. You know, it really sunk in when I saw someone else driving the car I’d been driving. I’ll probably get back in a car sometime later this year and keep my license current. And who knows what I’ll do next year." - Bobby Bennett
Posted by John Hale Racing at 1:07 PM